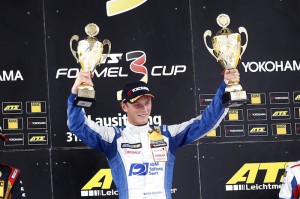 Sixteen drivers from nine countries started into the race with reversed-grid format at Lausitzring. Just like in the first race of this morning, the 20-minute sprint race was also marked by a crash, but the drivers escaped unscathed. The 3.442 kilometres of Lausitzring are a challenge.

Marvin Kirchhöfer started into the race from the sixth place and scored a top podium place. Freddy Killensberger won the Trophy ranking this time.

Marvin Kirchhöfer: “I did not have a perfect start and I had to hold back in the first turn. Then I saw the crash. Of course, I am pleased that I have won the race, but I hope that my team-mate will be able to compete tomorrow.”